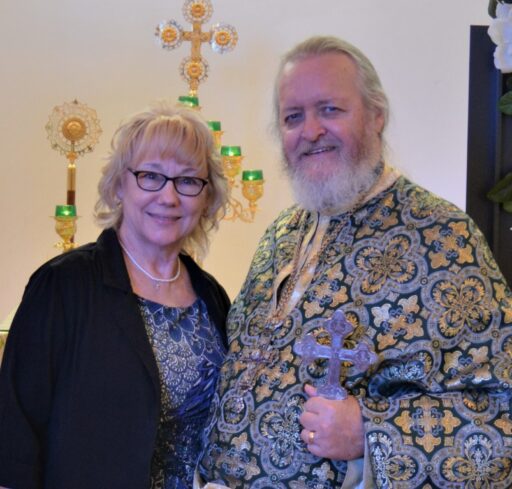 Fr. John was ordained as an Assemblies of God pastor in 1975. He and his wife, Khouria Marilyn, served in several Pentecostal churches in Wyoming and Colorado. Fr. John first became interested in Orthodoxy in the 1960’s from reading selections from the Church Fathers in Billy Graham’s Decision Magazine. In 1993, he and Kh. Marilyn began the process of joining the Orthodox Church. The Pentecostal church they were pastoring in Gillette, Wyoming eventually became Holy Resurrection Antiochian Orthodox Church after they were Chrismated in 1995. Following Fr. John’s ordination to the Prespytery of the Holy Orthodox Church, he was assigned as pastor at Holy Resurrection until he and Kh. Marilyn moved to Arkansas to pastor St Nicholas in 2001. Fr. John served as pastor for 20 years at St. Nicholas Church.  His request for retirement was grated by His Eminence, Metropolitan Joseph in the early summer of 2021.  Fr. John’s retirement became effective on August 1, 2021.

Fr. John received a Master’s degree in Marriage and Family Therapy from John Brown University in 2006. He is both a Licensed Marriage and Family Counselor and a Licensed Drug and Alcohol Counselor. Fr. John completed his Master’s degree in Orthodox Theology through the Antiochian House of Studies from Balamand University in Tripoli, Lebanon in 2011, writing his thesis on the history of Pentecostalism in the United States. Kh. Marilyn studied Orthodox liturgical music through the Antiochian Archdiocese’s Sacred Music Institute and received mentoring from Chris Farrah, Choir Director of St George Antiochian Cathedral in Wichita, KS. She is very dedicated to working with special needs children and is a Special Needs and Disabilities professional and Vice President of CALMM Autism Resources.  Fr. John’s patron saint is St John the Forerunner and Kh. Marilyn’s is St Mary, the Theotokos.

Fr. John was born in Oregon and grew up in California and Colorado. Kh. Marilyn was born in Tulsa and grew up in Arkansas and Oklahoma. They met while both were students at Southwestern Assemblies of God University in Waxahachie, TX, were they were paired as witnessing partners for Teen Challenge in Dallas. They were married in 1971. They have two children, Gabriel and Tabitha. Gabriel is an Air Force veteran and lives with his wife, Michelle, and sons in Charlotte, NC. Tabitha is a graduate of the University of Arkansas in with a degree in Animal Science.